Beyoncé’s “Formation” is getting a lot of earned media presence since the release of the song/video last Friday. But yesterday, on Buzzfeed, and article was posted with a link to a dance video of a dance studio doing multiple renditions of a dance routine with different groups of dancers including young girls and young boys. The choreographer, Willdabeast Adams, has over 1 million subscribers on Youtube and he has had multiple viral videos of other dance routines; a recent video was a Missy Elliot tribute including the dancer/actress, Alyson Stoner, who was the young dancer in Missy Elliot’s “Work It” music video. On Buzzfeed, the article has over 130,000 views, and the video on Youtube has over 575,000 views, and it was posted on Feb. 9 2016. So fact that Willdabeast Adams used a very popular and conversation starting song, along with his already massive fanbase, his videos will be shared many times over and over again.

This Choreography To Beyon… http://www.buzzfeed.com/sophieck/this-choreography-to-beyonces-formation-absolutely-slays?utm_term=.egXYQ9xR0x 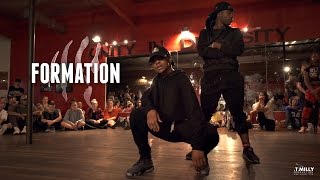 View all posts by trentballard2