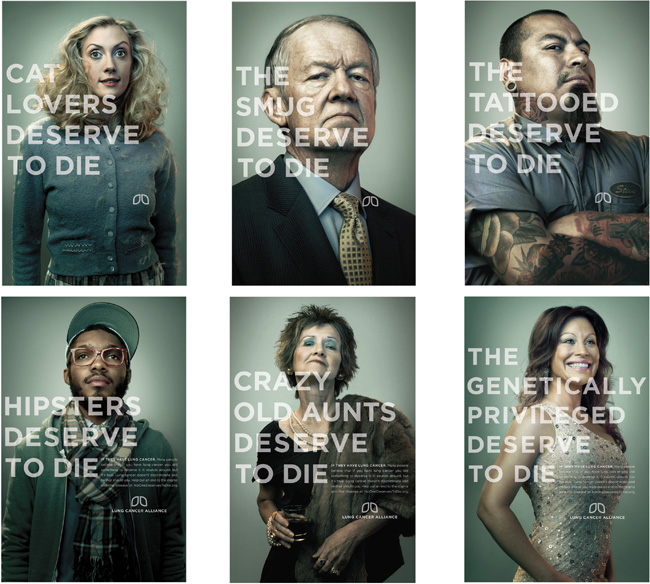 More Americans die due to lung cancer than breast, colon, and prostate cancer combined. But all three of these cancers receive more funding to find a cure than lung cancer does. The mortality rates in all three of those have continued to decrease as well, while lung cancer’s mortality has barely moved in decades. The Lung Cancer Alliance, an American Charity, knew the insight themselves: “People think you deserve to die if you have lung cancer. We hear it all the time from the patients and families we support. It’s subtle, but it’s loud and clear. When we go to Capital Hill to advocate for more funding, or to fight for national early detection protocols, we hear it all the time. People with lung cancer did it to themselves…implying that they somehow deserve to die. It’s not right.”

Laughlin Constable, the lead agency, knew that people immediately dismiss any kind of lung cancer messages, so they need to sneak up on people and catch them off guard. The first part of the campaign used out of home advertising, placing posters on street corners in some of the biggest cities in America. Each poster had a headline suggesting that these people, all with a different sort of hatred, deserves to die: Cat Lovers, Crazy Old Aunts, Hipsters, The Genetically Privileged, The Tattooed and The Smug.

After a week of being on the streets they added copy to the poster explaining more what it is about. They also ran commercials and streamed the videos on their social media platforms. The buzz around this campaign and the earned media that it received was worth millions.

View all posts by jsederberg2