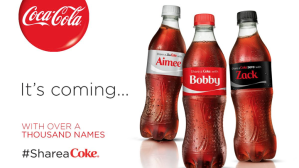 -Coca-Cola created bottles with people’s names on them and advertised it through TV ads and other forms of media as #ShareaCoke.

-The brand is trying to reach millennials who have never had a Coke before. They found that 50% of teens and young adults had never had a Coke and wanted people to share the experience with them.

-Coca-Cola is trying to make the brand more connected with consumers. By putting people’s names on the bottle they feel like that bottle is specifically for them. If someone gives them this bottle, it is like a gift and it feels even more special.

-This campaign started as paid media before the Coke bottles came out, however, it turned into paid, owned and earned media throughout the entire campaign.

View all posts by adriannay9